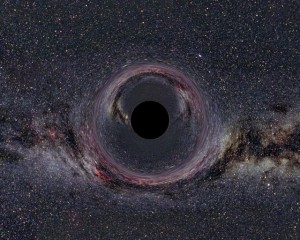 A simulated black hole from Ute Kraus’ “Step by Step into a Black Hole.”

An article in the MIT Technology Review reports that researchers have found that vortices in the south west Indian Ocean and in the South Atlantic are mathematically equivalent to black holes. Cosmology in general and black holes in particular have long been an interest of mine. I believe I did my first report on black holes in elementary school and as an undergraduate I took two astrophysics courses on stars and galaxies, the upper division course essentially a course in cosmology. In that course it was six or seven physics majors and me, and I for the course I researched the possibility of mini-black holes making up dark matter in galactic halos.

While this article is fascinating in and of itself, I’m particularly draw to its referencing Edgar Allan Poe’s short story “The Decent into the Maelstrom” which so captured McLuhan’s own imagination:

The vortices that can form in turbulent water are a familiar sight. Edgar Allan Poe described just such a whirlpool in his short story “A Descent into a Maelstrom” which he published in 1841:

“The edge of the whirl was represented by a broad belt of gleaming spray; but no particle of this slipped into the mouth of the terrific funnel…”

In this passage, Poe describes one of the crucial feature of these rotating bodies of fluid: that they can be thought of as coherent islands in an incoherent flow. As such, they are essentially independent of their environment, surrounded by a seemingly impenetrable boundary and with little, if any, of the fluid inside them leaking out.

If you’re thinking that this description has a passing resemblance to a black hole, you’d be right. Haller and Beron-Vera put this similarity on a formal footing by describing the behaviour of vortices in turbulent fluids using the same mathematics that describe black holes. 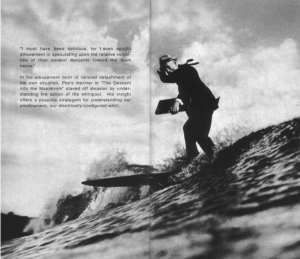 Page 150-151 from McLuhan and Fiore’s The Medium Is the Massage.

While McLuhan first makes use of Poe’s “A Descent into a Maelstrom” in the Preface to The Mechanical Bride, he returns to it time and again throughout his writings and lectures.1

Based on this MIT article, I’m now thinking about what McLuhan doesn’t pay attention to in Poe’s story, that is the description of the broad belt, what the MIT article calls “coherent islands in an incoherent flow.” What might the media/environmental equivalent of this belt of “coherent islands in an incoherent flow” be? Or is it even relevant because McLuhan clearly positions us within the maelstrom, inside the black hole, and, therefore, beyond the belt?