The following is a reading response to a number of readings I read for Introduction to Digital Curation I’m taking through the University of Maine’s Digital Curation Graduate Certificate Program.

I’m tempted to discuss Harvey Ross’ “Digital Curation: Scope and Incentives”1.  because it won me over with the first sentence which argues that digital curation is “central to professional practice in all digital environments” (3). Before class started, I’d already decided this is going to be the central argument in the presentation I’m proposing for next year’s Computers and Writing conference. Ross’ first chapter has already offered me plenty of ideas to develop a presentation for members of the computers and writing, digital rhetoric, and digital humanities communities. In spite of that, however, I am instead going to focus my response on Rahel Aima’s “Desiring Machines” and Edward Alexander and Mary Alexander’s “What Is a Museum?”2 Both illustrate key issues in Justin Wolff’s lecture and do so in ways that particularly resonated with me.

Aima’s “Desiring Machines” caught my attention off the bat, starting off as it did with an image from the Atari arcade game Battlezone. Battlezone, you see, was the first video games I was really good at. Good enough that I could walk up to any Battlezone game in any arcade and get myself on the high score list. While the image caught my attention, what I want to highlight is Aima’s discussion of curation within the context of the New Aesthetic, coded space, and the panoptic nature of both.

I read Bruce Sterling’s Wired article on the New Aesthetic when it was released and I’ve seen Bridle’s tumblr, so I was familiar with what was being discussed. As I started reading, I began to wonder why we were assigned this article, and then, about the time of the pull-out quote, it hit me: Through gathering all these disparate images, video, and quotes – “Drones mapping, mirror worlds, machine vision, surveillance infrastructure..render ghosts, nostalgia for the glitch, 8-bit reveries, #botiliciousness…” – Bridle wasn’t just collecting or aggregating; in creating The New Aesthetic Tumblr Bridle was defining a new artistic sensibility. In other words, by bringing all these things together in once Tumblr under the title “The New Aesthetic,” Bridle was adding value to all these digital objects by presenting them as parts of a whole.

Adding value to data and objects, Wolff stressed in his lecture, is one of the key features that differentiates acts of mere collecting or aggregating from acts of curation. (Ross and the DigCurV “What is Digital Curation” video stress the importance of adding value as well.) Important to note here is that through his acts of curation, Bridle both made us aware of this new artistic sensibility and shaped our perceptions about our relationship with these “eruptions of the digital into the physical,” our digital environment, and our existence within coded space. And it is here that we see the power inherent in the privilege of curation that Wolff warns against in his lecture, that is a key concern in Tony Bennett’s “The Political Rationality of the Museum,” and is discussed in the Alexanders’ “What Is a Museum?” 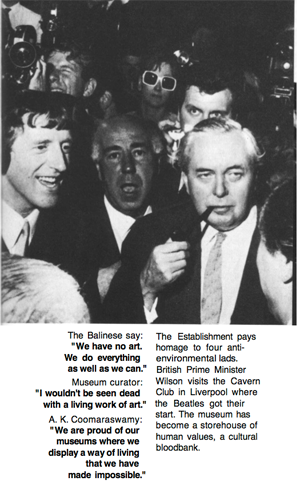 McLuhan and Fiore’s The Medium Is the Massage, p. 137

While I was familiar with The New Aesthetic, the terms “code/space” and “coded space” are new to me, but I’m finding them useful terms to think about in a number of contexts from my professional and personal life, everything from studying, teaching, and exploring networked writing environments; to my consumer habits being tracked and logged; to my current hobby of playing with Arduinos. (A regular joke in our household revolves around the idea of me rigging up an internet-connected Arduino to send us text messages when the mail is delivered, but I could just as easily have that information sent to an online data logging tool like Phant, and then use that information to look for trends in our mail delivery times.) Coded space is inherently networked, and just as I could easily use my coded space to surveil my mail deliverers, others can, and are, using their coded spaces to surveil me. My go-to example about how retailers track our buying habits for predictive purposes is the story of how a father learned that his teenaged daughter was pregnant because Target told him she was based what they were buying at Target – and no, they weren’t buying baby stuff. Wolff touches on this in his lecture as well, in the context of Foucault, noting that Foucault argued that we would move from a centralized panoptic structures to more fluid, dispersed forms.

Also of great interest to me this week was the Alexanders’ “What Is a Museum?” I have a particular interest in rhetorical and social memory, and I couldn’t help but read the article within that context. Just as the image of Battlezone caught my attention at the start of “Desiring Machines,” the connection between the origins of museums and the muses immediately caught my attention in both Wolff’s lecture and in “What Is a Museum?” The Muses, you see, are the daughters of Mnemosyne, the personification of memory in Greek mythology. (In Wax Tablets of the Mind Jocelyn Penny Small connects the domains of each of the Muses to a different form or channel of mnemonic encoding – dance to movement, epic poetry to writing (Calliope’s emblem is a writing tablet), lyric poetry to rhythm, etc. – noting that the more channels of mnemonic encoding we engage at one time, the easier it is to commit something to memory.) With that connection between the memory and museums already established, how could I avoid thinking about museums as anything other than artificial memory systems?

I should probably point out here that our notion of memory is far more narrow than it was during the Classical and Medieval periods. Back then, memory was not just about storing and retrieving information but was regarded as something more akin to our contemporary notion of creativity. While mnemonic practices were concerned with storage and retrieval, the goal was not rote memorization and remembering in and of itself but to use one’s memory inventively. (See Mary Carruthers’ The Craft of Thought or ask me to rant sometime – we still use our memory systems inventively, it’s just that we don’t recognize most of our practices and technologies of memory as practices and technologies of memory.)

While we tend to think of memory as something that just happens (we remember), memory is actually an active process regardless of whether we’re talking about our personal memories or social memory. As an active process, it’s something we curate if for no other reason than we are interpreting what we remember and applying it or repressing it for a specific purpose. Memory, as I like to argue, is about making meaning, both for ourselves and for others. (It is, after all, one of the canons or parts of rhetoric.)

So, museums, as institutions of memory, are institutions of curated memory. And, likewise, curation is itself a practice of memory. As both Wolff’s lecture and various readings argue, curation is more than archiving and preservation. It’s about the whole lifecycle of an artifact (physical or data) and adding value to that artifact for reuse. People of the Classical and Medieval worlds, as I’ve noted above, regarded memoria as more than issues of archiving and preservation. They understood memoria to be about using our memory systems to make meaning (adding value) through reuse.

Postscript: The New Aesthetic, in making us aware of the “eruptions of the digital into the physical,” functions as what Marshall McLuhan calls an anti-environment. “Environments,” McLuhan explains, “are invisible. Their groundrules, pervasive structure, and overall paterns elude easy perception” (The Medium Is the Massage, 84-85). Art, McLuhan argues, has the ability to reveal our environments to us, and we see that in Justin Wolff’s discussion of the art of Mark Dion which focuses on the environment of the museum itself. While McLuhan’s never that far from my mind, I lectured today on the sections of The Medium Is the Massage that includes environments, the role of art, and, yes, museums.