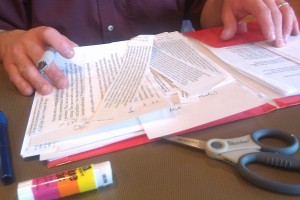 When I opened my notebook to arrange all my clippings into a coherent talk for CCCC 2013, Lisa asked me to pause so that she could take a picture. She tweeted it with the comment, “this is what an unblocked John Walter looks like.”

Finishing up my presentation for CCCC this Saturday, I’m wading through material that isn’t going to make it into my talk. Taken all together, the session planning emails, research notes, musings, talks with Lisa, and reflections on silence as I freewrote last spring are far more usable and are far more material than I expected. Even a lot of the raw freewriting is asking to be turned into a collage essay—a genre I learned from Peter Elbow’s work and which I regularly assign in writing classes.1

Much of this writing, even the session planning emails, is deeply rooted in the personal, and while the focus of my own part of the session is on the issue of academics with severe writing difficulties and how we as mentors and friends and supervisors can be productively supportive, I will get intensely personal, too. As I’m looking at all this material, especially the freewriting and process writing I did last year as I was struggling to write again, I’m wondering what should and should not be shared. I’m going bold in the presentation, so I might as well not shy away from things here, so here’s an unedited passage from a freewriting session I did on March 24, 2012:

I’ve been spending a good deal of time thinking about silence these days. About becoming silent and being silent. Not silent because I want to be or even silence as protest but a pathological silence. Silence I couldn’t escape from if I wanted to That kind of silence. A silence I couldn’t escape from. I struggled against that silence. I wasn’t able to do what I wanted. I was pushed into a corner. I had to fight. No, not really. I didn’t fight. I let it overtake me. Not that I saw myself has having any options at the time. Emotionally, psychologically, I’m not sure that I did. The silence was a sympton of something much greater, a deep and difficult depression, and I couldn’t address the silence until I had addressed the depression, unitl I got through that. I have gotten through that and now I seem to be writing these days. Writing something. Writing somehow. And that’s good. I like that. I’m writing and it’s good. The silence was a difficult thing to deal with.

Just do it, I’d get told. Or it finally comes down to you and the pen. You and doing the writing. You getting it down. Just write. One page a day. Everyone can write one page a day. Yes, I did that. Or tried to do that. What I produced was horrible, terrible, dark screeds against my self. Dark outpourings of self-loathing and hatred and despair. Painful stuff to look at now, but I have looked at it. I seem to have saved some of it. Some piece of it. And that is good. Not because I like it but because I have it to share in all its raw and terrible and nasty and dark ahd hateful nature. Hopelessness. I have that and I can point to it and I can say that it’s not just about doing it. It’s not just about sitting down and putting pen to paper or fingers to the keyboard. You need to be ready to write. When writing difficulties have become pathological, you need to resolve the underlying issues first. You need to get yourself into the proper state of mind first. Get yourself emotionally healthy again. If you don’t, no amount of freewriting is going to save you. Or, maybe I should say that no amount of freewriting was going to save me. It was but one more venue to bash myself into obilivion. Another weapon to turn upon myself. At times I tried to do the writing without beating myself up but the only thing that would come, the only kind of writing I could sustain in that vein was to attack myself. And it was not good. Not good at all. It wasn’t helpful. That kind of self-loathing would tear me down and remind me that I was once again failing at something so central to who I wanted to be and the life I wanted to live and there’s nothing good about that.

I almost titled my CCCC talk “Freewriting Couldn’t Save Me.” Freewriting couldn’t save me a year after my psychologist had decided I no longer needed treatment for the depression that developed out of my failed marriage, a depression that first manifested itself in an increasing inability to write. I’m reminded here of Lynn Bloom’s two case studies in “Anxious Writers in Context: Gradaute School and Beyond,” published in Mike Rose’s edited collection When a Writer Can’t Write: Studies in Writers’ Block and Other Composing-Process Problems. About Ellen, the graduate student unlikely to finish her degree, Bloom writes, “To resolve Ellen’s writing problems would require a marriage therapist in addition to a writing specialist, to focus on their family context as the source of some of the difficulties (131). As Juliette Ludeker, one of my co-presenters this Saturday, put it in the title of her talk, there are situations “When Being Able to Write Has Nothing to Do with the Ability to Write.”

I was up in Omaha last weekend to attend the Jacobson Symposium on Teaching with Technology at Creighton Univeristy. Cheryl Ball was this year’s Jacobson Lecturer (Steven Krause was the Jacobson Lecturer last year). This year’s theme was From Word to Image: The New Literacy and my talk, “Old Practices and New Literacies: Composing with Words and Images,” began with a discussion of the Franks Casket (well, really, I began with Hrothgar reading the hilt in Beowulf) and ended with a discussion of two student new media projects,1 tied together through Mary Carruthers’ discussions of monastic rhetoric (with a particular focus on ruminatio and the distinction between memoria verborum and memoria rerum) and Kristie Fleckenstein’s concept of imageword. (More on this later, I think. Inspired by Kathie’s recording of our CCCC round table, I used my iPod and iTalk to record my presentation.)

What I’m really writing about is a visit to Dario’s Brasserie in the Dundee neighborhood of Omaha. Well familiar with my love of Belgian beer, Gina and her husband took me to Dario’s. We thought about going for dinner, but since Cheryl had dinner plans and we were really going for the beer, we went to Dario’s about 9:00 PM. Story has it that Dario, the chef and owner, opened his own place in January because he wanted a restaurant that featured beer. Belgian beer. END_OF_DOCUMENT_TOKEN_TO_BE_REPLACED

One of the projects I’ve had to put on hold in order to finish my dissertation is “Memory and the Art of Database,” a study of database technologies through history and what light these earlier technologies might shed on computerized database design and use. I’m particularly interested in the inventional aspect of databases which Mary Carruthers explores in works such as The Craft of Thought: Meditation, Rhetoric, and the Making of Images, 400-1200 and “Inventional Mnemonics and the Ornaments of Style: The Case of Etymology” (Connotations 2.2 (1992): 103-114).

I just found out yesterday that I can attend the Computers and Writing confernece this year, much too late to propose a paper, but not yet too late to participate in the Graduate Research Network. I’ve just submited my GRN abstract:

"Memory and the Art of Database"

Through the Renaissance, conceptions of memory focused not so much on the distinction between memory stored inside us and outside us but between natural memory, which was always internal, and artificial memory systems, which could be either internal or external. From this perspective, a simple mnemonic rhyme, a stone monument, a memory palace, a book, and a computer database are all equivalent in that they are artificial memory systems. In both the classical and medieval traditions, artificial memory systems were considered an important part of invention. Furthermore, in the medieval memory tradition the real fear was not in forgetting, but in information disorder, which was considered a sin against the virtue of Prudence. Memory system design and practice was, therefore, of no little concern.

This project, which is in its early stages, seeks to place computerized databases in their historical context by examining the practices of early technologies of information storage and retrieval such as topoi, catalogue poems, the Ciceronian “Art of Memory,” medieval florilegia, renaissance commonplace-books, indexes, libraries, card catalogues, and even the research paper note card, and exploring what light these earlier memory technologies may hold for what we might call an “art of database.”

From an Ongian perspective, how we access and store information — the databases we use — helps structure and is structured by how we think. My dissertation itself touches upon these issues. For instance, I have a chapter devoted to Anglo-Saxon non chronological presentation of historical narrative, most notably the Geatish-Swedish wars in Beowulf and Alfred’s “Preface to Pastoral Care,” though I think you can even see it in such poems as “The Wanderer.”

It also ties in nicely with metadata, tags, and tagging, which I’ve discussed here from time to time.

Finally, if we want to think about culture as memory (and I do, see Connerton, 28, and Petrov 77-78), then culture itself is a type of database, with social memory as the information and the practices of social memory as the interface. Surely someone working on social networks has made this observation before.

Connerton, Paul. How Societies Remember. Themes in the Social Sciences. Cambridge: Cambridge UP, 1989.

Cross posted to Notes from the Walter J Ong Archives.