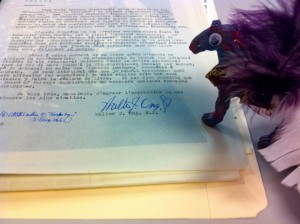 Sparkle Pony helping me with some research.

Last month I spent a week in Saint Louis to do some research in the Walter J. Ong, SJ, Manuscript Collection. It was my first research visit since I finished my three years as the initial processing archivist of the Ong Collection and left Saint Louis for a visiting position at UNC-Wilmington back in 2007. Far too long, really.

I went back with some specific plans, including the creation of two digital exhibits based upon materials in the collection and getting permission to write an introduction to and seek publication for the one article which Father Ong had fully prepared for publication but never placed. All in all, it was a great trip, and, as Lisa predicted, just what I needed at this stage of reclaiming my scholarly voice.

Going through my notebook I took with me on the trip, I found the following snippet, and I have no idea why I wrote it down other than that I found it amusing. In a Sept. 18, 1978 letter to Brian Vickers regarding the cost of possibly holding the International Society for the History of Rhetoric conference in the Netherlands, Fr. Ong wrote: “Maybe we could hire ourselves out to turn windmills or plug up the dikes.” [call no.: DOC MSS 64.2.1.1.199] As I said, I have no idea why made note of this.

Note on the picture: That’s Sparkle Pony with a letter from the Lincoln Lecture files [call no. DOC MSS 2.1.1.237-39], which covers a month-long lecture tour Fr. Ong took through Western Africa (Cameroon, Nigeria, Senegal, and Zaire) in 1977 on behalf of the U.S. State Department as a Board of Foreign Scholars Lincoln Lecturer. Sparkle Pony is featured in Sierra & Stedman’s Kairos article “Ode to Sparklepony: Gamification in Action” (in particular, see “Part 2: The Game“) and inspired the Sparkle Pony Adventurer Soceity. Sparkle Pony wants you to know that while it is the Sparkle Pony, it is not the only sparklepony. Yes, Sparkle Pony often travels with me.