I don’t often talk about my personal life here on Machina Memorialis, but much has happened of late.

While you wouldn’t know it from this blog, which has been far too quiet during the past few years, 2010 and 2011 were eventful. Among other things, I was dating for the first time in 18 years. In July, 2010, I realized I really wanted to be dating Lisa Schamess, a good friend who has shown up on this blog from time-to-time1 , but for many reasons—the least of which was that she lived in Washington, DC, about 1,100 miles away—I didn’t expect anything to come of it. The notion was there, though, in the back of my mind, and it subtly changed the way I interacted with her. 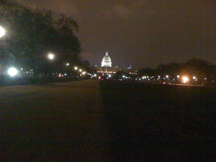 Fast forward some seven months. To my surprise, Lisa and I were talking the possibility of a relationship. I went out for a visit, things went amazingly well, and on May 30, 2011—seven moths ago today—Lisa, my two kittens Huginn and Muninn, and I arrived in Washington, DC in a car full of stuff to find a moving truck already waiting for us. A while later, she asked me a question to which I said yes.2 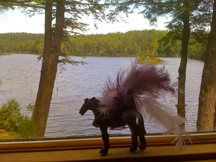 I’ve spent the last seven months getting used to a new life, a  new city, and new roles, including that of step-father-to-be to a most extraordinary 13-year old. Family life suits me, and I’m exceedingly happy.  (As I’ve hinted at occasionally, I haven’t always been able to say as much for most of the time I’ve kept this blog.)

As I get settled into things here, I’ve been looking outward, both in terms of taking advantage of my new city and in returning to things I’d set aside. For instance, I’ve finally met Jeffery Jerome Cohen (something that took far too long), thanks, in part, to the excellent public offerings of George Washington U’s Medieval and Early Modern Studies Institute; I’m gearing up to restart home brewing;3 and I drop in on the Library of Congress when I need to do research or a quiet place to write. I’m still thinking about memory, Walter J. Ong and Marshall McLuhan,4 and composition. And medieval studies and science fiction and fantasy too, if you must know. I’ve been too quiet for long enough.

I’m looking forward to what the next seven months shall bring.